The Lipstick Chronicles has a new look!

Mystery lovers know it's not good to believe in coincidence. That said, I added a series of "favorite links" to my page this weekend. Today I got two invitations via Facebook to see The Lipstick Chronicles' new look. Coincidence? I think not. Join me in checking out this updated site—today on "Manly Mondays," TLC welcomes Gregg Hurwitz.

Every so often a new author comes along with a book that propels the reader along from beginning to end. Such is the case here. Fans of Jane Austen have already latched on to it—both the protagonist and others in the story are big Austen fans who quote her often, but for story form, I think the style is straight from Georgette Heyer. The situations are similar to Heyer's Regency books, but the content is definitely 21st century.

Elizabeth Parker faces the New Year without her two-timing boyfriend so she accepts an invitation to a murder mystery party at Great Aunt Winnie's new Cape Cod B&B. There she meets a drop dead gorgeous Englishman, a couple who own a New York antiques business, and her childhood nemesis, Peter McGowan. Guests at the party include the nasty millionaire who covets Winnie's B&B, his trophy wife and his cold daughter as well as two septuagenarian women-one wealthy, one poor.

Mystery readers will not be surprised when the murder party turns real. They will, however, enjoy the entertaining rest of the story. This debut has "Agatha" written all over it!
Posted by Msmstry at Thursday, August 27, 2009 No comments:

SWAN FOR THE MONEY by Donna Andrews (Minotaur)

When Donna told my husband and me she was setting a book at a flower show, even Noel got interested in mysteries. When she asked me if I'd like to be a character in the book, I was delighted. Sure enough, the rose show that Meg Langslow is asked to coordinate works right into her parents' new hobby, but it has her running from swans, climbing fences, dodging goats, and finding bodies. Meg's wacky family has brought us all a lot of laughs over the years, and this outing is no exception. Their wackiness is balanced nicely by the eccentricity of the wealthy Mrs. Winkleson who owns the estate where the Caerphilly Garden Club's first rose show will be held. (Mrs. Winkleson is sponsoring the prize for the blackest rose at the show. Meg soon learns that Mrs. Winkleson also has a thing for black horses, swans, and decor.)

The story moves from one calamity to the next, but somehow they all seem plausible. The goings on at the rose show are spot on for flower shows—except I've never heard of anyone's discovering a body! Swan for the Money deserves a spot at the head table!
Posted by Msmstry at Tuesday, August 25, 2009 1 comment:

Ryan won the Agatha Award for her debut Prime Time and I was delighted to catch up with her protagonist, Charlie McNally. Like Ryan, Charlie is an Emmy-winning investigative reporter.

In Face Time, Charlie gets an opportunity for an exclusive story with the Constitutional Justice Project as they try to prove "Deadly Dorie" Sweeney (who, by the way confessed to killing her husband) is innocent. The CJP's new evidence turns up just as Oscar "Oz" Ortega, who just happens to have been the lead prosecutor in Sweeney's case, announces his candidacy for governor.

Charlie's juggling of her career with her new love life and visiting her mother who's in town for cosmetic surgery add comic relief to the very real concerns of finding the truth behind the crime.

In Air Time, Charlie and Franklin, her long-suffering producer, are on the trail of fake designer purses. Turns out, the high fashion industry is a hotbed of grand larceny, organized crime, and murder. Making their job tougher, a young consultant has the ear of the news director, and she's trivializing their hard-hitting news story with cute puns and artificial deadlines.

While both stories are highly entertaining quick reads, they also bring the reader into the world of journalism and investigative reporting. Journalists who go undercover to reveal the truth behind these stories really do put themselves at risk. Ryan relates the true picture in entertaining, well-plotted mysteries. More, please!
Posted by Msmstry at Wednesday, August 19, 2009 1 comment:

A BAD DAY FOR SORRY by Sophie Littlefield (Minotaur)

Stella Hardesty has something of a split personality: By day she runs a sewing/sewing machine repair shop and by night she tracks down abusive husbands and boyfriends and teaches them a lesson. She knows firsthand there is little recourse for abused women other than moving to a shelter. Stella wants more for them—much more. She wants them to have respect and upkeep. Her most recent client, Chrissy, simply wants help with her piece-of-trash husband. Roy Deen shouldn't be much of a problem, but then he disappears with Chrissy's two-year-old son. Very quickly, things turn ugly. Stella is sure she's in over her head, but it's too late to find a boat.

I don't usually like to be in the head of people outside the law—and Stella is definitely outside the law, but Stella is right: Somebody has to do something to help these women. You, too, will find yourself saying under your breath, "You go, Stella!"
Posted by Msmstry at Saturday, August 15, 2009 No comments:

If you ever wonder why I'm always including these two guys in my library programs, take a look at this excellent interview—then dash to your favorite independent bookseller and stock up on their fabulous books!
Posted by Msmstry at Tuesday, August 11, 2009 No comments:

You can tell by the title—Deborah Knott won't spend much time in Colleton County in this outing. Like most Maron fans, I was a bit disappointed to see the judge leave my favorite spot, but that didn't last. Deborah goes to the North Carolina coast for a judges' conference and some of the home folks are there with her. It doesn't take long for a body to turn up—one who in North Carolina parlance, "needed killing," so there are plenty of suspects. Deborah is drawn into the hunt for the killer, and while she's sleuthing, the readers get to visit some outstanding Wilmington restaurants, learn about the state's movie industry, and meet someone from Deborah's past.
Admittedly, I'm a huge Margaret Maron fan. In fact, I buy these books and give them to a lot of folks who've recently moved to or visited North Carolina so they'll understand what we Tarheels are all about. That said, I think this is the best non-Colleton County book yet. It's summer. If you can't come to an NC beach in person, this is the next best thing!
Posted by Msmstry at Sunday, August 09, 2009 2 comments:

Iraq amputee Sam Blackman has just opened a new detective office in Asheville with new partner and love of his life, Nakayla Robertson. Before they can even get their furniture placed, they get a case—which, truth be told, doesn't appear to require exceptional skills to handle. Appearances are deceiving, however, and soon the pair is surrounded by dead bodies, death threats, old people, and literary icons.

Once again, de Castrique uses his extensive knowledge of Asheville, its families, and, this time, the Jazz Age to give a contemporary story a sense of nostalgia. The Jazz Age connection to Asheville is F. Scott Fitzgerald, who stayed at Asheville's Grove Park Inn during the summers of 1935–1936.

The story is lively, conditions are compelling, and the mystery incredibly clever. Match your wits against Sam's.

Mark de Castrique will be in the Triangle with the NC Men of Mystery Tour. (See listing on Meritorious Mysteries July 25.)
Posted by Msmstry at Wednesday, August 05, 2009 No comments:

A SLICE OF MURDER by Chris Cavender (Kensington) 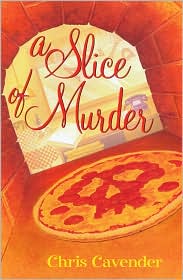 If you don't like to wait 50 pages for your first body, this one's for you! "911? I need to report a murder," it starts—and the pace doesn't slow down after that! Eleanor Swift, North Carolina widow, owns a pizza restaurant, and she's not above making deliveries when she's short staffed. That's how she discovers the body.

Eleanor had slapped the deceased at the Harvest Festival last fall after he made a pass at her. In the mind of the police, that gave her a motive for murdering him now. That's how she becomes interested in solving the crime.

Eleanor and her often-flighty sister Maddy make a great detective team as well as great pizza. Just like in a well-seasoned recipe, this book is peppered with a bit of romance, a dash of humor, and a full portion of solid crime solving. Buon appetito!

Chris Cavender (aka Tim Myers) will be in the Triangle with the NC Men of Mystery Tour. (See listing on Meritorious Mysteries July 25.)
Posted by Msmstry at Wednesday, August 05, 2009 No comments: