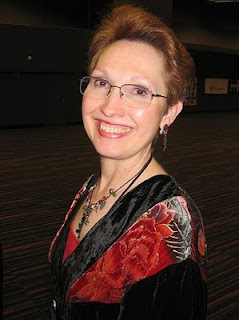 Today's guest blogger, Lillian Stewart Carl, comes close to having something for everyone. She says of herself, "Over the years I've been inventing my own genre, mystery/romance with supernatural/ historical/ mythological underpinnings." She categorizes her books as "Mostly Mystery," "Romantic Suspense," Non-Fiction and Collections," "Fantasy Thriller," "Romantic Fantasy," and "Fantasy." She's also written non-fiction. Lillian has traveled extensively in Europe, the Middle East, India, and Japan, and she uses her experiences to bring her books to life.

Please join me in welcoming Lillian Stewart Carl as she compares her own life as a writer to that of Mr. Earbrass, a writer in another time.


Of Novels, Harps, and the Writing Life

Recently I completed my twentieth novel. (That I keep starting new ones proves the triumph of hope over experience.)

Completing a novel should be a moment of victory. Usually it’s more of a moment of exhaustion. I collapse across the finish line with a whimper, not a bang. When I mentioned my dazed and confused condition to an author-friend, she very kindly sent me a copy of the late Edward Gorey’s The Unstrung Harp; or Mr. Earbrass Writes a Novel.

I’ve always appreciated the mordant wit of Gorey’s illustrations and fictional pieces, such as The Gashlycrumb Tinies and the animated credits for PBS’s Mystery. But this particular work had escaped my attention—which means I had the delight of discovering it at a very appropriate moment.

It’s a very slender volume, with delicious bits of text facing illustrations in Gorey’s whimsical and yet dark style. Mr. Earbrass himself is a stocky, slightly bewildered-looking individual, whose head resembles an upside-down foot extending from his collar—perhaps for those days most writers are all too familiar with, when everything goes topsy-turvy.

As I paged through the book, my chuckles grew into guffaws. Gorey captured all the roller-coaster experience, from exultation to nausea, of writing a novel.

Not that all the details hit home. The scenario plays out in what appear to be the early days of the twentieth century. Mr. Earbrass writes with one of those old-fangled things called a pen, on sheets of paper—there’s not a keyboard in sight, not even that of a (shudder!) manual typewriter.

When he cuts and pastes in revision, he actually cuts and pastes. How quaint! He hand-carries a stack of paper to his publishers’ office, rather than attaching a file and hitting Send. And Mr. Earbrass only writes a novel every other year. Goodness! What luxury!

However, most of what Mr. Earbrass goes through in writing his novel, The Unstrung Harp, is exactly what I’ve gone through—and yet, what I’m usually rather surprised happens. (A slow learner, that’s me.)

He ponders “where the plot is to go, and what is to happen to it upon arrival”. While it’s never explicitly stated that The Unstrung Harp is a mystery, at one point Mr. Earbrass’s characters “are feverishly engaged in wondering whether to have the pond at Disshiver Cottage dragged or not,” which implies a mysterious happening.

With me, the mysterious happening is how I’ll start out with a tempting MacGuffin, like a seventeenth-century charm stone, a bog body, or the Loch Ness monster, only to have to jerk the plot’s leash back into line when it wanders away from my proffered treat and starts sniffing trees in the park. Mr. Earbrass jots down odd bits of description, and tries to track down even odder references (“His mind’s eye sees them quoted on the bottom third of a right-hand page . . .”)

You might think the Internet would obviate that desperate scramble through the library shelves, but it doesn’t, not necessarily. There was, for example, the time I searched until my eyes were bepixilated for information about Ann Boleyn’s prayer book, which I knew I had seen in the British Museum, only to come up blank. Probably because, as it turns out, what I saw in the British Museum was Lady Jane Grey’s prayer book.

Oh my yes. There’s always that spot in the middle of the novel where I think I’d better change the identity of the murder victim, and I haven’t yet decided who the murderer is and therefore have provided every possible suspect with an alibi, and maybe I should move the crime scene from a convent to a brothel—in other words, the story falls apart in my hands like a moth-eaten sweater.

Then the day comes. Mr. Earbrass is finished. He wanders about the house picking up and putting down small objects, thinking vaguely he should be doing something useful. At moments like this, I often find myself wondering what month it is, or being incapable of answering a simple question like, “What do you want for dinner?”

And that’s just the writing. The publishing is another series of sardonic jokes.

The galleys, for example, the pages printed in book format, always appear at some inopportune moment, and “at first they look so different he thought they had sent him the wrong ones by mistake.” Then there are galley gremlins, like the one who changed the date of the Armada in The Murder Hole from 1588 to 1688 after I’d checked every word of those galleys and returned them to the publisher.

The cover art usually produces a cry of, “Whatever were they thinking of?” At least I’ve never had a cover like one on a friend’s romance, where the heroine was equipped with three arms. But the cover of one my heroic fantasy novels, instead of evoking Cretan bull dancers, shows a pudgy guy bulldogging a Hereford and begs for the caption, “Hey, sweetie, what’s your sign? I bet you’re a Taurus.”

The reviews squat on Mr. Earbrass’s table in a threatening heap while he tries to distract himself by reading something else. A good thing he didn’t have the cyber-reviews on Google or Amazon, which don’t just prove that one bad review will obliterate five good ones, they will leave the author prostrate on her fainting couch with a cold compress on her brow.

Every now and then Mr. Earbrass gets together with other authors to complain about the unspeakable horror of the literary life, something I do myself—the whine and cheese party is a standard venue. After all, who understand the perils of writing a novel better than another novelist?

And who better to laugh with, not at, Mr. Earbrass?

Lillian Stewart Carl has written multiple novels and multiple short stories in multiple combinations of mystery, romance, and paranormal. Her latest book is The Charm Stone, book four of the Jean Fairbairn/Alasdair Cameron series: Scotland’s finest and America’s exile on the trail of all-too-living legends. Learn more about her and her works at her website.

Wonderful blog, Lillian, and so true. I am not one who can spit out the words like some of my writer friends then go back and edit them into brilliant chapters. I struggle, get nauseated, and really need a hot toddy when I write "The End."

Thanks for putting the smile on my face today.