Ladies on the Lam Tour

LADIES ON THE LAM, Jane K. Cleland, Rosemary Harris, Stefanie Pintoff, are coming to the Triangle next weekend. We'll be at several venues and hope to see you at one!

One sunny summer’s day last year, I finished Among the Departed, the fifth Constable Molly Smith book, and sent it off to my editor at Poisoned Pen Press for her suggestions and comments. I leaned back in my chair, relaxed and happy, with the wonderful feeling of satisfaction at having finished the book.

My mother was visiting me, and that evening we had friends over. I learned over the course of dinner that night that there really is nothing new under the sun.

Very briefly the plot of Among the Departed is as follows: When Molly Smith was thirteen years old she had a sleep-over at her best friend’s house. She ate breakfast the next morning with the friend’s family and then her mom picked her up. Shortly thereafter her friend’s father went to the convenience store. He was never seen again. No trace of him was ever found, no one reported seeing him after he walked out the door; he did not have a criminal record and no known criminal contacts. Fifteen years later his remains are found in the British Columbia wilderness by Constable Molly Smith of the Trafalgar City Police, Constable Adam Tocek of the RCMP, and Norman the police dog, while searching for a child who has wandered away from his family’s campsite in a brave search for bears.

Over dinner, my friend, whom I shall call Jane, started telling us about her father.

Who disappeared into the B.C. wilderness and wasn’t found for seventeen years.   He was driving from Ontario to Southern B.C., last seen at a gas station in Calgary. His car was found far north of his expected route. Although in this case his car was found, for seventeen years there was no trace of Jane’s father himself. And then the body was found by a hunter. In the B.C. wilderness.

Isn’t that just too weird? I think if I hadn’t already written the book, I wouldn’t want to use the story because it would look like I was stealing my friend’s tragedy.

In Among the Departed the focus of the book is, as well as on the reopened police investigation, the fallout of the man’s disappearance and how it pretty much destroyed his wife and two children.

My friend Jane was older than the children in the story, being in her mid-twenties at the time, but the disappearance had a devastating impact on her mother. Jane’s mother was suspected for a while of being involved in the disappearance of her husband and thus her bank accounts were all frozen. In Among the Departed the insurance company won’t pay out of course, and the wife has no source of income so is dependent on welfare and what she sees as condescending charity of the women of her church.   In the real life case, Jane and her brother are considering approaching the police to get what documentation they can, so they can try and find out the truth about the disappearance and death of their father.

In the fictional story... Well, you’ll have to read Among the Departed to find out what happens there.

The fifth and newest book in Vicki Delany’s critically-acclaimed acclaimed Constable Molly Smith series, Among the Departed, was released on May 3rd 2011. Vicki is also the author of the Klondike Gold Rush series (Gold Fever) and standalone novels of psychological suspense (Scare the Light Away, Burden of Memory).

Having taken early retirement from her job as a systems analyst in the high-pressure financial world, Vicki is settling down to the rural life in bucolic, Prince Edward County, Ontario where she grows vegetables, eats tomatoes, shovels snow, and rarely wears a watch.

Library Journal gave Among the Departed a starred review saying: “Her exceptional ability to create characters, both realistic and sometimes creepy, makes this another terrific addition to her outstanding body of work.”


Vicki left a copy of the fourth Constable Molly Smith novel, Negative Image, for a Meritorious Mystery reader. Send me an email at mysteryheel @ mac.com and tell me why you'd like to win it. This contest will end at midnight on Monday, May 30.
Posted by Msmstry at Monday, May 23, 2011 4 comments:

"So Much in Common" by Mary Jane Maffini 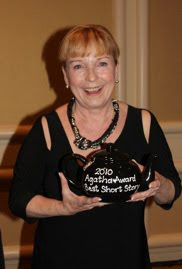 Mary Jane won the Agatha Award for her short story "So Much in Common" on Saturday night in Bethesda MD. Ellery Queen Mystery Magazine has very kindly allowed you to view it without charge. I'm delighted to suggest you give it a read!
Posted by Msmstry at Monday, May 02, 2011 1 comment:

What's going on folks? I posted the winners of the Carolyn Hart & Hallie Ephron books on Monday, April 25. They haven't contacted me with their snail mail addresses. I'll give you until Sunday, May 8 to email me at mysteryheel @ mac.com (don't put in the SPACES!). If you don't contact me by then, I'll announce new winners from those posts.

On the other hand, Prentiss won the latest contest for The Ambition. He included his mailing address, so his copy will go out immediately.

Thanks to all of you for playing. I'll be posting more contests soon.

The Agatha Awards were presented last night at the Malice Domestic banquet in Bethesda MD. Winners were as follows:

Congratulations to all the winner! Happy reading!
Posted by Msmstry at Sunday, May 01, 2011 No comments: