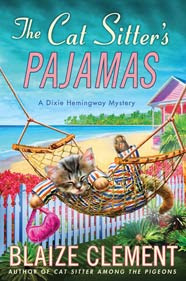 The Dixie Hemingway series is one of my favorites. Its covers or titles are quite misleading causing the reader to expect very light and fluffy cozy mysteries.

When I read Curiosity Killed the Cat Sitter, I discovered the first book in a very complex, skillfully written and at times heart-wrenching series. These books are brimming with sensitively portrayed characters who deal courageously with trauma and adversity. The Cat Sitter’s Pajamas is Clement’s most recent book in this series.

Living on the tropical barrier island of Siesta Key, located off the coast of Sarasota Florida, pet sitter Dixie Hemingway has a propensity for stumbling across bodies. Entering the home of famous football star Cupcake Trillin to care for his pampered cats, Dixie unexpectedly encounters a beautiful semi-dressed woman claiming to be Cupcake’s wife. There’s a problem with that assertion because Dixie knows Cupcake is vacationing in Italy with his wife Jancey.

When the police arrive to arrest the intruder, they discover the body of a woman; however, it’s not the body of the woman claiming to be Cupcake’s wife. So begins the tale of past secrets, deception, and people not being who they seem or claim to be.

Cat Sitter’s Pajamas can be read as a stand-alone mystery; however, I strongly recommend you read the series in order. Doing so will help you better appreciate Clement’s characters’ development and the back story of the family relationships that have shaped Dixie. You’ll have more opportunities to feel the soft breezes of Florida, hear the gulls squawking as parakeets fly by and smell the salty air of Siesta Key which is a character and place you will want to embrace and return to again and again.

Sadly, Blaize Clement passed away in July 2011. Her eighth book is about half completed, with an extensive outline, according to her son John Clement. 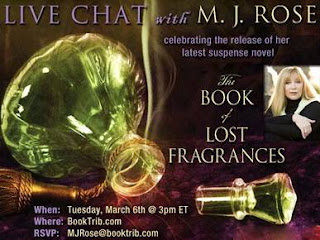 You are cordially invited to take part in a LIVE BookTrib author chat with M.J. Rose on Tuesday, March 6th at 3 p.m. as she discusses THE BOOK OF LOST FRAGRANCES and her other bestselling novels. Here's a chance to chat and win a copy of the book—as well as the fragrance it inspired.

Mark your calendar!
Posted by Msmstry at Saturday, February 11, 2012 2 comments:

It's always sad when we lose favorite mystery writers. Our latest is Dorothy Gilman, author of the "Mrs. Pollifax" novels, who died February 2. Gilman was named Mystery Writers of America's Grand Master in 2010.

Today, Karen Kiley of the Cary Public Library told me that Blaize Clement who wrote the popular Dixie Hemingway pet sitter series had died in July. Clement's latest, The Cat Sitter's Pajamas, was just out in January. Karen promises a review of that one soon.
Posted by Msmstry at Monday, February 06, 2012 No comments: