Watch this space for a new contest soon…

There are five Bouchercons currently scheduled across the US and Canada. The first person to email me (mystery heel at Mac.com) with the correct order (by year) of these Bouchercons will be the winner. I will email the winner requesting his/her snail address. Tor will mail the copy directly to the winner. I'll also post the winner's last name and state on this site. 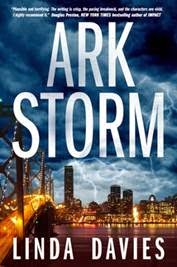 “A plausible and stormy eco-thriller that might presage future events…. an exciting and enjoyable book.”
—Kirkus

“Ark Storm is a winner. It draws you in and thrashes you about like a hurricane. It’s plausible and terrifying. The writing is crisp, the pacing is breakneck, and the characters are vivid. I highly recommend it.”
—Douglas Preston, New York Times bestselling author of Impact

“This vivid, exciting and original tale turns a very real superstorm possibility into one of the most exciting stories I’ve read in a long time. I was going to say that I got blown away by Ark Storm, but I’m afraid to! So I’ll say that I got caught up in it, loved it and had wonderful time reading it!”
—Whitley Strieber, New York Times bestselling author of The Grays


Linda Davies’ first novel, Nest of Vipers, has been published in more than thirty countries, selling over two million copies. She is also a winner of the Philip Geddes Prize for journalism. Her latest novel is ARK STORM (A Forge Hardcover; $25.99; August 19, 2014), a stylishly written thriller that tackles the relationship between high finance and extreme weather events.
The Ark Storm is coming—a catastrophic weather event that will unleash massive floods and wreak more damage on California than the feared “Big One.” One man wants to profit from it. Another wants to harness it to wage jihad on American soil. One woman stands in their way: Dr. Gwen Boudain, a brave and brilliant meteorologist.

When Boudain notices that her climate readings are off the charts, she turns to Gabriel Messenger for research funding. Messenger’s company is working on a program that ionizes water molecules to bring rain on command. Meanwhile, Wall Street suits notice that someone is placing six-month bets on the prospect of an utter apocalypse and begin to investigate. Standing in the shadows is journalist Dan Jacobsen, a former Navy SEAL. War hardened, cynical, and handsome, Jacobsen is a man with his own hidden agenda.

ARK STORM brings together the worlds of finance, scientific innovation, and terrorism in a fast-paced thrill ride that will leave readers gasping.

LINDA DAVIES is a graduate in Politics, Philosophy, and Economics from Oxford University, and worked for seven years as an investment banker before escaping to write novels. Davies is married with three children. She lives by the sea in Suffolk, United Kingdom.

It was the summer of 2010.  I was living in Dubai, and I had read that dramatically heavy rains were falling in the deserts of neighbouring El Ain in the United Arab Emirates.  The historical average number of rainfall events for June through September is two.  The National Weather Service forecasted zero rain events over that period.  But it did rain. On fifty-two separate occasions. And it hailed and galed and thundered.  It made the international news.

There were rumors of masts in the desert, of scientists and computer models, and it sounded like something out of a James Bond movie. And then I read an article which explained what had been going on.

It was the work of scientists.  Technicians were mounting ionizers on masts, producing electrons which attached to dust particles in the atmosphere. These dust particles rose by convection until they reached the right height for cloud formation where they attracted water molecules floating in the air. Those molecules then started to condense around them.  Billions of droplets of rain formed and fell….

So far, so Bondian.  Then I heard about the latest twist where the ionisers are sent up on drones, which made me think of terrorists, and I had myself a novel. It had all the things I love to write about—science, terrorism, financial shenanigans counterterrorism—and in the midst of it, a wonderful heroine.

As promised, I've got a special treat lined up for the October 16 program at the Page-Walker Cultural Arts Center in Cary! Local authors Brynn Bonner, Margaret Maron, and Sarah Shaber will join me for a discussion about their newest exciting mysteries.

Brynn's latest in the "Family History" series is Reel Time. At her new website "Five Minute Family History," Brynn encourages folks to work on their own family histories a few minutes every day by offering frequent prompts and organizational tips.

Margaret's Designated Daughters is the nineteenth (can you believe it?) in her North Carolina Judge Deborah Knott series. This one hit home for me: It's about the (mostly) women who are called on to care for aging relatives.

Sarah's Louise Pearlie books are set in WW-II Washington DC.  Louise is a young widow from Wilmington who is a file clerk in the OSS. Louise's Blunder, the fourth in the series will have just become available in the US on October 1. Sarah's website is currently under reconstruction.

We'll have copies of ONLY THESE titles for sale and signing from Quail Ridge Books and Music. A portion of the sales will be donated to the Page-Walker.

Posted by Msmstry at Wednesday, September 10, 2014 No comments:

I just got an email from the good folks at McIntyre's in Fearrington Village. Highlights of Pete's exciting note follow:


The dapper Peter Lovesey on Saturday, September 20th at 11am. Mr. Lovesey is one of the most lauded mystery authors we’ve ever had here at McIntyre’s. He’s won multiple Silver Dagger Awards, a couple of Macavity Awards for Best Novel, and an Agatha Award. In 2000, he was given the Diamond Dagger Award for a body of work and in 2007 was awarded the Agatha Lifetime Achievement, again for a body of work. Suffice to say, the man knows what he’s doing. He’ll be here for The Stone Wife, the 14th installment of his acclaimed Detective Superintendent Peter Diamond series.

Next, on Saturday, October 18th at 11am, we welcome Mark Pryor. I met Mark in Albany NY at last year’s Bouchercon. He was on a panel moderated by Cara Black and was smart, erudite, and humorous with his answers, enough so that I decided to buy a copy of one of his books. [Note: When a bookseller or reviewer BUYS a book, it's REALLY shows interest!] When I went to get it signed we got to talking and I told him he had to come to McIntyre’s sometime. He asked where it was and I told him Fearrington Village. He paused then asked, “Is that where the Oreo cows are?” Turns out he lived in Chapel Hill for a while and would come out with his family for Sunday Brunch so he was familiar with the store. Now he’s coming to share with us his character Hugo Marston, the head of security for the American Embassy in Paris. His latest is The Button Man which is a prequel and set in London.

Mark is bringing along a good friend of his, Jamie Mason. She is the author of Three Graves Full this very wry, very darkly humorous novel about a man with three bodies buried in has backyard. One that he put there, the other two he knew nothing about until the police show up. I really enjoyed this one and can’t wait to have both Jamie and Mark here. I already know there will be a lot of good humored banter going on.

This last one I’m going to mention is one that, when it was proposed to us, I didn’t have to think twice about. I was, “Let’s do it!” On November 8th at 11am we have Japanese author Fuminori Nakamura here for his latest novel Last Winter We Parted. His first novel translated into English, The Thief, won the Oe Prize which is the Japanese equivalent of the National Book Award. His second book, Evil and the Mask (so dark I couldn’t finish it, but so original I’m going to try again) was nominated for a Bram Stoker Award. He has also won a David Goodis Noir award. Mr. Nakamura’s English will be accompanied by his editor, the ever-effervescent Juliet Grames, who will act as his translator.

Some of you may remember Juliet from our Night with SOHO Crime event a couple of years where she and Paul Oliver, head of publicity for SOHO, convinced a roomful of people to tear apart my carefully constructed SOHO display in their haste to buy every title mentioned that night. What a beautiful melee, I wish we had taped it. Anyway, here we’re going to have one of the most talented young writers of his generation paired up with his incredibly talented editor. I can’t wait for this one! Plus, that afternoon we may have another surprise for mystery fans. We'll keep you posted about it.

Posted by Msmstry at Monday, September 08, 2014 No comments: