Joanna Slan has combined two genres—crafts and amateur sleuth mystery—beautifully. Single mom Kiki Lowenstein is part owner of and chief designer for a scrapbook store. She also has a reputation for finding bodies. In this outing, Kiki actually films a victim being shot—at the May Day festival at her daughter's private school. Keeping Kiki and daughter Anya safe at her mother-in-law's house is complicated by the unannounced visit of Anya's demanding, unpleasant other grandmother. Making Kiki's work life more stressful is the appearance of a new by-the-book store partner and a time-sensitive workload. Fortunately for the reader, Slan keeps her chapters short, intersperses crafting tips appropriately, and gives plenty of prompts about story lines as they weave along to a dramatic conclusion. Crafters, mystery fans, and animal lovers will enjoy this well-crafted series. FTC Disclosure - This book was provided by the publisher.
Posted by Msmstry at Saturday, April 21, 2012 3 comments:

The Next One to Fall by Hilary Davidson (Forge)

Travel writer Lily Moore is visiting Peru with photographer and best friend, Jesse Robb. Since the death of her sister from a drug overdose three months ago, Lily has been depressed and feeling lost. At the Machu Picchu, the Lost City of the Incas, they find a woman dying at the bottom of a stairwell. Her final words convince Lily that she was murdered but the official investigation rules it an accidental death. Unable to accept this, Lily begins investigating and uncovers a pattern of dead and missing women connected to the dead woman's traveling companion. Her investigation sets in motion a series of events that will surprise and shock you. Just when you think you know what is going to happen something totally unexpected occurs

This is the second book in a series. Davidson's first, The Damage Done (which I have not read but plan to do so) won the Anthony Award. If you like a mystery that takes you to places you would love to visit and at the same time make you glad you were not there, this is a book for you!

FTC Disclosure - This book was provided by the publisher.
Posted by Msmstry at Monday, April 16, 2012 No comments:

The Unseen by Heather Graham (Mira)

The pollsters say (but who believes them?) that almost three-quarters of us believe in some form of the paranormal. They also say that almost half of us say we believe in ghosts. Paranormal, then, is normal—or something.

I am one who believes. I wear a Santa hat that says "I believe." It's more than belief though. That aside, this book is about ghosts and the author writes with confidence and knowledge, not only about ghosts, but about the San Antonio locale where this novel is set. A Texas Ranger and a US Marshal with paranormal abilities are recruited
to head a team to investigate the remains of eight women. The band of agents with special abilities embark on a macabre journey to catch a serial killer. They must move quickly, as another young woman is missing and may be dead. This current mystery is connected to an occurrence that took place in1835 at the Longhorn Inn in Room #207.

Both US Marshal Kelsey O'Brien and Ranger Raintree have the ability to commune with the dead and both have unusual ability to "see" the dead as they were in life and even to clearly see the last final—and painful—moments. Kelsey is sensitive enough to receive visions of the past when she stands in the locations where powerful psychic events took place. She, herself, is staying at the Longhorn Inn in Room#207, the site of a murder in 1835 when a woman was strangled for refusing to reveal the whereabouts ofa priceless diamond.

The connection between that past event and a current situation, namely, another woman who was murdered in that same room less than a year, compels the team of investigators to move as quickly as possible because Raintree and O'Brien also believe that the Longhorn murders are also connected to eight recently uncovered cadavers.

Ghosts and the psychic abilities to communicate with the dead provide a rich canvas for this macabre mystery. I find ghostly tales relevant to our human understanding of life and everything. Our spirits go on. Life is eternal. Nothing dies, but only changes form. Ghosts are not, then, irrelevant—or are they ?

I found this book to be highly readable and enjoyed the feeling, again, of being freed of constructs that are being questioned more and more. There are tales to be told about the past and not only when murder is involved.

FTC Disclaimer—This book was provided by the publisher.
Posted by Msmstry at Thursday, April 12, 2012 No comments: 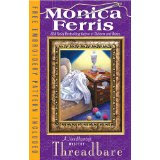 The story begins in a snowy alley behind the Excelsior movie theater, when a teenager unexpectedly stumbles over the body of Carrie Carlson, a local vagrant and petty thief. The presence of an empty bourbon bottle appears to be the obvious cause of her death. Surprisingly, Carrie’s death is ruled not to be an accident. Her cousin Margaret, and friend of Betsy, is accused of causing Carrie’s death. Hoping to clear Margaret of these allegations, Betsy’s investigation uncovers the deaths of several other homeless women. Is there a connection between their deaths? Who would want them dead and why? --Karen Kiley
Posted by Msmstry at Thursday, April 12, 2012 No comments:

I just got this note from Kent Kruger that should interest mystery readers across the United States.

Years ago, as I understand it from talking to the old-timers in this business, touring authors en masse wasn’t uncommon. Crossing the country in a bus, stopping at bookstores along the way, introducing audiences to the faces behind some of their favorite books—the result was usually great enjoyment by those on both sides of the experience. But this kind of tour hasn’t been seen in a very long time. Until now.

Late last fall, I received an invitation from my publisher, Atria Books, to be a part of the renewal of this exciting enterprise. The Atria Great Mystery Bus Tour will get underway on Thursday, April 12, with a launch at the Mystery Bookshop in New York City. My fellow authors on this excursion will be John Connolly, Liza Marklund, and M.J. Rose, all exceptionally fine writers in the crime genre.

The tour will take us first into New England for stops in Connecticut, Massachusetts, Vermont, and northern New York, then through the Midwest with events in Ohio, Illinois, Wisconsin, and my home state of Minnesota. We’ll wend our way south with a visit to Kansas before winding up the tour in the Saint Louis area. We’ll make twelve appearances in eight days, a true whirlwind of an affair.

For specifics of times and places, check the Events link on my website.

We’ve already had terrific media coverage in USA Today and Publishers Weekly, and the buzz just continues to build. Man, am I stoked! This should be nothing short of fantastic. I’m encouraging you to mark your calendars for the date we’ll be in your area, and get to the bookstore early. It’ll be crowded, you betcha! Hope to see you all somewhere along the way.

Of course, I'm bummed that the bus won't come through North Carolina—but maybe next year!
Posted by Msmstry at Tuesday, April 10, 2012 No comments: