I know this isn't mystery-related, but it's my blog, so…

Our daughter Erin has been nominated for the Martha Stewart American Made award. We'd surely appreciate your SIX votes each day (I have no clue when the contest is over). As Andy Griffith used to say, "I 'preciate it—and good night."
Posted by Msmstry at Friday, August 30, 2013 No comments:

I ran into Darden North at Killer Nashville this weekend. His new book, Wiggle Room, is just out and his publisher is offering the Kindle download free today through Friday (August 28–30). I just downloaded his new medical thriller featuring Air Force surgeon Brad Cummins. I suggest you grab it, too!
Posted by Msmstry at Wednesday, August 28, 2013 No comments:

Crocodile on the Sunbank has been won—but I hope you'll all participate in "Buy a Friend a Book Day" at your local bookstore!

Happy reading!
Posted by Msmstry at Sunday, August 11, 2013 No comments: 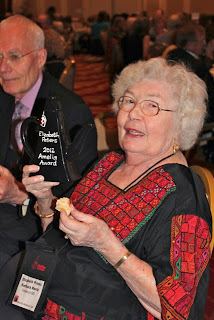 I was invited to this event on Facebook and I hope you'll join the effort. One new thing:  Let's all be sure to buy that book at a local INDEPENDENT bookstore. Support local economy — at least with one book.

The mystery community lost one of the greats this week. Barbara Mertz (Elizabeth Peters/Barbara Michaels) died on Thursday. To honor her, I've ordered a copy of Crocodile on the Sunbank for Saturday, August 31. I'd like to make a new friend by sending this copy to the first responder who has never read the Amelia Peabody series. You'll have to get the rest of the books on your own, because I know you'll be hooked!

Just email me with "Crocodile" in the subject line. Be sure to include your name and mailing address.

Elizabeth Foxwell has written a beautiful tribute to her friend.
Posted by Msmstry at Sunday, August 11, 2013 No comments:

CAT IN AN ALIEN X-RAY by Carole Nelson Douglas (Forge)

“Cats rule—dogs just wish they did, and people are fooling themselves.”  Yes, Midnight Louie is back with his whole clowder— feline and human with just a touch of canine. OK, I confess, I’m a fan of Las Vegas mysteries, but Louie is definitely my favorite and Carole Nelson Douglas continues to keep us guessing in Cat in an Alien X-Ray.


This time Louie’s dealing with the “usual”----murder, mobsters, Max --with a twist of disappearing buildings. Is it science or aliens or just Vegas? Is that body really an Aztec astronaut somehow back from space or is the old-time  mob related to his murder? And were all those ancient space travelers really cats in disguise? Louie has all the answers.
--Doreen Weaton
FTC Disclosure: This book was provided by the publisher.

Reading Bill Crider is like sitting by a cozy fire—in sweats and fuzzy slippers! Every time I see "a Dan Rhodes Mystery" on the cover, I know I'm in for a good time.

When the body of an English instructor at the community college turns up behind a Dumpster one morning before classes, Sheriff Dan Rhodes is off to another rib-tickling adventure. This time he's dealing with a survivalist compound, a wild pig, and a beauty shop break-in—not to mention Dr. Pepper withdrawal.

Dan keeps the peace in and around Clearview, Texas with a supporting cast as outrageous as that in Sheriff Andy Taylor's Mayberry.  Y'all have fun, now, ya hear?

—FTC Disclosure: This book was provided by the publisher.
Posted by Msmstry at Friday, August 09, 2013 1 comment:

Dirty NYC cop Anthony Xavier Ricci is about to get a second lease on life, after being caught up in a Federal sting. If he cooperates with the Feds, he will not be charged with any crime and will be given a new persona, a new name, and he will be placed in the Federal  Witness Protection Program. And so, Ricci becomes Tony Solaia and is born anew and relocated to San Francisco. Thus begins John Lescroart's latest novel, The Ophelia Cut.

Meanwhile, our main protagonist, attorney Dismas Hardy is facing a mid-life crisis. The kids are grown, his practice is shrinking, and a six-year old secret may raise its ugly head. His brother-in-law, Moses McGuire, and his best friend, Detective Abe Glitsky, are both nervous about this secret. Only six people know the secret and from time to time it threatens to come to the surface.

Everything is going to become more complicated. Moses McGuire's daughter, Brittany is brutally raped by Rick Jessup,a councilman's chief of staff. McGuire roughs up Jessup, and a couple of months later, Jessup ends up dead. Quite naturally, McGuire is the prime suspect. Hardy will defend McGuire, but his friendship with Glitsky will be called into question and the six-year-old secret involving all of them may yet surface!

John Lescroart's latest book starring all his leading characters may be his best yet. Please enjoy The Ophelia Cut!

Chubby Checkers has nothing on the twists in Jeffery Deavers’ The Kill Room. It’s the latest in his Lincoln Rhyme series and it will keep you reading.
Just then you think he’s told you everything about the good guys and the bad guys, there’s another twist. Is he really a good guy or really a bad guy? Think you know? You’re probably wrong.
“Are you a patriot or a traitor?” This time Deaver goes political, but not with opinions—with facts. You decide which side the National intelligence and Operations Service (NIOS) with its “targeted remedies” is on.
I couldn’t wait to finish it, but didn’t want it to end. You’ll think about this one long after you finish reading.
--Doreen Wheaton
FTC Disclosure: This book was provided by the publisher.