Death On A Longship by Marsali Taylor (Attica Books)

Cass Lynch is working as a waitress when she talks her way into a job skippering a Viking longship for a Hollywood film. She has been sailing since she was a child.  Her dream is to be a sailing ship's captain and she thinks her big break has finally arrived—even though it means returning home to the Shetland Islands. She hasn't been home since she ran away as a teenager to pursue her dreams of sailing.

Cass has a very complicated past including the death of a lover and being estranged from her parents. Her parents' relationship is also strange.  When a dead woman turns up on the boat’s deck, Cass and her family come under suspicion by Detective Inspector Macrae. Cass realizes she must identify the killer in order to save herself, her family, and her future as a skipper from false accusations.

There are lots of possible suspects and red herrings to keep you guessing. The characters are all interesting and everyone seems to have had a motive and opportunity to kill. I enjoyed reading this not only for the great mystery but also for information about the history and life on the island and a sail boat.

FTC Disclaimer: This book was provided by the publisher.

Posted by Msmstry at Wednesday, February 27, 2013 No comments:

Many other titles are available for 99¢ or FREE at the Poisoned Pen website.

While you're browsing around the site, check out Brooklyn Bones by Triss Stein. It's a great mystery—especially if you like your murder early in the story. A skeleton is found while remodeling a Park Slope brownstone in the first few pages. It's just out—in several formats. I highly recommend it, even at full price!

Posted by Msmstry at Wednesday, February 27, 2013 No comments: 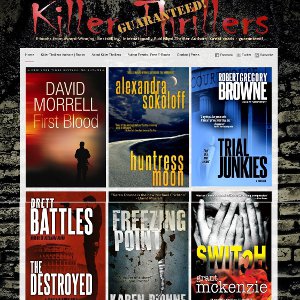 Alexandra Sokoloff just emailed that she has joined a gang of her thriller-writing friends to form the Killer Thrillers! author collective bringing low-cost e-books from award-winning, bestselling, internationally published authors.

Posted by Msmstry at Wednesday, February 20, 2013 No comments:

Copies of books for winners of both contests are in the mail! Thank you to all who entered. (I gained a couple of pounds just reading the recipes and looking at the great pictures!)

Watch for other contests soon!


Cutoff dates for the two contests running currently on Meritorious Mysteries is Wednesday, February 20 at noon EST. In case you missed the notices, I'm condensing the rules below. 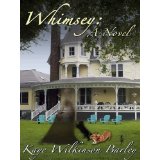 My friend Kaye Barley has just published her first book! Hooray for Kaye! I haven't read it yet, but I'm getting ready to download it. Kaye describes Whimsey as "a novel of Southern fiction with a splash of magic and a touch of fantasy, topped with a sprinkling of humor." Who cares if it's not a mystery? Margaret Maron and Hank Phillippi Ryan have both given great blurbs. Let's go build a fire, make a pot of tea, and indulge in Whimsey!
Posted by Msmstry at Thursday, February 07, 2013 3 comments:

Murder on the House by  Juliet Blackwell (Berkley) 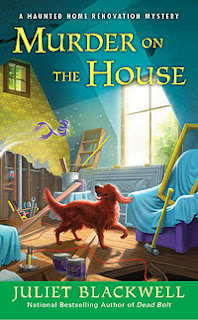 Mel (short for Melanie, which she doesn't like ) Turner is a contractor who can communicate with the spirits of the dead and the word has spread in spite of her effort to keep a low profile. There is the rumor that the Bernini home is haunted and the new owners want to turn it into a haunted bed-an-breakfast. All sorts of  problems arise as Mel looks into this old home that she wants to restore. There is a competitor who badly wants the job of restoring this home and to help the new owners decide who should do the restoration, an odd recommendation is that Mel and her competitor have to spend one night in the house in order to win the project.

There are many twists and turns in this plot, including a young girl who is 100 years old and whom no one can see but Mel. During the sleepover, someone dies and there are so many characters in this plot that it's hard to imagine who might have done it. The neighborhood is one in San Francisco, a progressive city if ever there was one in this country. The descriptions of the inside of the old house were fascinating and real, as well as the long list of eccentric characters who are odd, charming. and fun to get to know.

There's a lot of detail as well as whimsy and colorful dialogue as the plot thickens. It's interesting to learn about the equipment of people who can communicate with ghosts.

While it's possible to read this paranormal mystery as fantasy, it also can be read to ask relevant questions about other dimensions. It begs questions about consciousness (it isn't quantifiable), time, eternity, mystery in life, and the very real possibility of an invisible reality that we've been programmed to ignore. People who say that ghosts aren't real may not be using the right criteria: None of our emotions can be scientifically quantified or proved, yet they are real. Our senses aren't reliable and are certainly not the only way to identify reality.

Anyone with a questioning mind can find a lot to chew on in paranormal mysteries and Blackwell is reliably good at storytelling and teasing questions from us regarding other dimensions and their inhabitants—like ghosts !