A killer is loose on the Monterey Peninsula in Jeffrey Deaver’s latest thriller. A book as current as the Internet and the cyberspace, we love and hate. A book immersed in the alternate universe where so many fans disappear. Around the world millions of players of these violent games can’t always tell the real world from the game world, where they spend so many hours. Kathryn Dance is an investigator specializing in kinesics, the ability to read the body language we all emit.

She is in the hunt for Travis Brigham, a young man determined to kill everyone who bullied him on the internet blog The Chilton Report. Kathryn's personal and professional life already full, but she must put all her energy into capturing Brigham. The first two attempts to kill two of the bullies have just missed and the potential victims have survived, but now a third person just tangentially aligned with the case has been murdered. Kathyrn is racing the clock to catch the killer before there are more victims. With her partner, Michael O’Neill and computer expert Jon Boling, Kathyrn must follow the clues to catch a killer. Deaver actually uses real websites to entice his readers into helping to solve the crime.

It was a 5 a.m. phone call from Terese Collins that got Myron’s attention. With no detailed explanation—just a plea to "come to Paris" and instructions to get on an Air France jet leaving JFK that night and meet her at her hotel, the d’Aubusson. It has been a decade since Myron and Terese hooked up, but he remembered a spectacular few days with her on an island near Aruba. Myron has had only three true loves in his life and Terese was #2. Since his ongoing relationship with Ali (love #3) has hit a rough spot, Myron decides to head for Paris. It doesn’t take long for him to be enmeshed in the murder investigation of Terese’s ex-husband. Picked up by a special branch of the French police, Myron is released but more confused and intrigued then ever. He certainly will not desert Terese , but he knows he will need the assistance of his powerful best friend Win and the help of his staff back in New York, Esperanza and Big Cindi. Fans of Coben will recognize the gang that has played significant roles in past thrillers. It will an exciting roller coaster, but this time it will be Europe that is the background for Coben’s latest adventure, not the familiar scenery of New York or New Jersey.
—Steve Bank
Posted by Msmstry at Sunday, June 28, 2009 2 comments:

WITHOUT A GRAVE by Marcia Talley (Severn House) 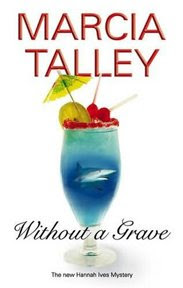 Hey, mon, if you don't get a chance to visit the islands in person this year, here's a great way for armchair travel. Hannah Ives and her Naval Academy husband are spending time in the Bahamas while he's on sabbatical. They're enjoying he tranquil, laid back island lifestyle and their congenial neighbors but soon find that there's trouble in paradise. A huge, luxury resort community is being built which threatens the island's delicate coral reef. As the battle between the builders and the islanders ensues, a terrible forest fire reveals a body. A subsequent hurricane leaves another. Hannah and her spunky neighbor, Molly Weston, must use all their detecting skills to solve the crimes.

One of Talley's strengths, for me, is a realistic look at how crime effects ordinary people who encounter bad situations. Even in the face of adversity, life and family must go on. This makes her stories much more believable for me.
Posted by Msmstry at Sunday, June 21, 2009 1 comment:

From DDS to Historical Mystery Writer

The journeys we take on life's paths are never predictable. It's one of the earliest themes in House of Ghosts. Joe Henderson, a washed up detective, finds himself drawn into a mystery that starts with the death of an old neighbor, but takes him on an historical journey from present-day Westfield, New Jersey, to Princeton University, 1939, to the docks of Depression-era Brooklyn, and into the aerial battles above Italy and Poland in 1944. This unlikely but compelling journey leads Henderson to revelations of long-held secrets about thwarted bombing missions over Auschwitz.

I know about unpredictable journeys. A dentist in a solo practice in Scotch Plains New Jersey since 1983, I now find myself the author of a successful mystery book, with two more books in the works.

How the heck did that happen? I grew up in a middle class section of Union, New Jersey with my parents, Jack and Selda and older brother, Ron. A child of the 1950s, I played punch ball in the street, didn’t go to camp, and didn’t talk back. It was a world where kids rode their bikes to get where they needed to go, mothers stayed home, and no one had two cars. And most important, people gave a damn about each other.

My dad was a dental technician; this inspired me to go into dentistry. So,in 1979, I graduated NYU's College of Dentistry, then completed a dental residency at Mount Sinai Hospital, NYC. I stayed in Jersey, opened my dental practice, and lived the life of a successful suburban doctor. That could have been the whole story of my life. But that wasn't the way it turned out.

Always an avid reader, I love the books of Chandler, Hammett and Hemingway. A recent favorite is Michael Chabon, especially his Yiddish Policemen's Union.
He is a master.

But as a self-confessed history junkie, I also read a lot of non-fiction. I'm especially drawn to the subject of World War II. I have read more than a hundred books on the most destructive period in world history. I read for pleasure, but I'm doing research at the same time.

Reading good writers encourage a person to write, some say. For me that was part of the incentive. But my interest really began when I realized I could write as well as some of the people I was reading.

My own life took a dramatic turn when my first marriage ended in divorce. I always liked the part of Pennsylvania just across the Delaware River; and in 2001, I decided to make a new start, which included leaving New Jersey after fifty years.

I now live in Upper Bucks County, PA with my wife, Anne, two dogs, four cats and a parrot named Boeing. It's a beautiful, rural area where farms, horses and dairy cows populate the landscape.

The move to Pennsylvania infused me with a writing bug that drove me to finally finish a first manuscript. I credit Anne's support as a crucial ingredient. Pursuing a new career after the age of fifty is daunting. But with her encouragement, I take my writing very seriously; it's a second job. Anne has been more than supportive in this crazy quest to become established.

My late mother-in-law, Irene Lederer, told stories about her memories of American bomber jets flying over Auschwitz where she was being held prisoner. She said that she wondered: Why didn't they target the camps? The question stayed in my mind. My love of my mother-in-law combined, I guess, with my childhood memory of a time in our history when people gave a damn about the plight of others. So, I set out to discover the answer to my mother-in-law's question. My original plan was to write a book of non-fiction about it. Research was tedious and difficult: hundreds of hours in Princeton's library, searching for information wherever it could be found, interviewing people. Somewhere during that time, though, I became concerned. After all, I had a DDS after my name, not a PhD in history. I worried that publication of a non-fiction book might be difficult for me without the scholarly credentials.

That's when I began to frame all the research and information I had gathered into a book of fiction. Before this, I'd already begun work on a book in what I hoped would be a series of detective novels, about this washed-up Westfield NJ Police Department Detective, Joe Henderson. I put that book aside and worked instead to shape the World War II material into a mystery/detective framework, ultimately giving life to House of Ghosts. I hope I managed to combine the solidity of an historical novel with the excitement and mystery of the detective genre. One thing is for sure, I plan to keep writing. The first novel took ten years. I'm hoping to work a little faster from now on. The next book is the one I put aside. It's called Gene Killers, and is targeted for a winter 2010 release. A prequel to House of Ghosts, it will be the second in the Joe Henderson detective series. Gene Killers tackles the biotech industry and the incompetence of the FDA. When a genetically-engineered drug about to receive FDA approval goes bad, the destructive results escalate until the U.S. and China stand at the precipice of war. I'm already working on the third book in this series, doing research again in WWII history. This book starts in the waning days of the war, in a Russian-surrounded Berlin and ends in Washington, D.C. in the year 2012.

As in House of Ghosts, the history is fact, based on hard research, but the conclusions are mine. Each book is its own journey, and reminds me of how much I love where my life has taken me. I'm still a dentist in New Jersey, but now I'm a writer too. And who knows what's next? Life is long. The journey goes on.
Posted by Msmstry at Thursday, June 18, 2009 2 comments:

If you need a fun summer read, stick this paperback original (PBO) in your pocket and take it to the pool or beach. Alexis Peterson has just left one popular daytime show for another (where she's playing dual characters) and dressed to the nines, she's all set to be a presenter at the Daytime Emmy Awards show. Only problem is, her co-presenter doesn't show—until she's at the podium reading the nominees. Then he appears—dropping from the rafters. Quite dead of course.

The murders continue, the tension mounts, and the good times roll.Whether or not you're a soaps fan, you'll enjoy this lighthearted Hollywood romp.
Posted by Msmstry at Thursday, June 11, 2009 No comments:

After breaking things off with her fiance, Laurel accepts a tenure track position with Duke University's Psychology Department and moves from her California home to Durham NC. Still reeling from the breakup, she finds it hard to concentrate on her new job until she becomes fascinated by finding that the files from the Rhine parapsychology lab experiments have recently been released to public view. Joining forces with a wickedly handsome young professor, Laurel proposes to re-create some of the experiments to prove the existence of ESP.

It's too bad my mother wasn't available to warn Laurel, "Be careful what you wish for…"

Read The Unseen in full daylight—surrounded by people you trust.
Posted by Msmstry at Thursday, June 04, 2009 No comments: