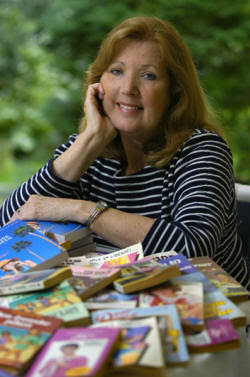 One of the most loyal supporters of my Tuesday guest bloggers has been Mary Kennedy. She started posting even before she told me she was an author! Then, she sent me a personalized copy of Dead Air, the first in her Talk Radio Mystery series. Immediately on the heels of the book, I got a wonderful note from Carolyn Hart about Mary. If you don't want to be behind the curve in the latest hot mystery reading, grab a copy of Dead Air, so you'll be all ready for Reel Murder, which hits the shelves in June.

When I was playing around with ideas for book two in the Talk Radio Mysteries, I suddenly settled on the perfect theme--a movie set murder! What could be better? Lola, Maggie's flamboyant mother, is a marginally employed
actress "of a certain age," as she's fond of saying. She always reminds Maggie that it's not her fault that classically trained actresses are working in obscurity while the Lindsay Lohans and Lauren Conrads dominate the silver screen.

Maggie is thrilled when Lola actually snares a small role in a flick being filmed in south Florida. And Lola wangles a job for Maggie as "script consultant." After all, it's a psychological thriller and Maggie did a lot of forensic work when she was a psychologist back in Manhattan. So now Mother and daughter will be working together side by side on the set.

It's an ideal situation, until the leading lady turns up dead on the beach.

Maggie immediately goes into sleuthing mode. Who would want to kill the drama queen? The simple answer is: everyone! The more Maggie investigates (with the help of hunky detective Rafe Martino) the more she realizes that the suspect list could be in the double digits.

I loved writing this book and I used up all my "true stories" from my days on movie sets. I had a small speaking part in a Robert Wagner film (just enough lines to get my SAG card) so re-living "the old days" was fun and nostalgic for me.

Do you ever feel nostalgic for a certain time in your life that seemed magical and carefree?

Do you ever get a tiny flash of inspiration and it blossoms into a full-blown plot? I think it's a gift when that happens, and I wish it happened more frequently.


Mary Kennedy is a former radio copywriter and the award-winning author of forty novels. She is also a clinical psychologist in private practice and lives on the east coast with her husband and eight eccentric cats. Her novels have appeared on the Barnes and Noble, Publisher's Weekly and BookScan best-seller lists and she has received an award and grant from the National Endowment for the Arts for "artistic excellence in literary fiction."

She hopes you'll visit her website.
Posted by Msmstry at Monday, March 29, 2010

Since I live in my home town, I'm bombarded by flashes of the much smaller town where I spent my childhood. Every time I ride by a special site, a memory strikes.

I can't plot, and I hate to write conversation, so writing a mystery is out of my comfort zone. What I can do, though, is write short essays about places and events which I publish in our local newspaper under a column called "Looking Back."

Newcomers to Apex say they enjoy these articles. Other natives, though please me most by saying, "I remember…"

Nostalgic? Don't get me started. But let's skip past that and get to the really important stuff ;-)


Was Robert Wagner as dreamy in person as on screen???

Hey Robin, thanks for stopping by!He's fantastic. Actually, it was Natalie Wood who was starring in the movie..I had brain freeze, and wrote Robert Wagner. The filming was in NC and he used to visit her on the set all the time. We were all wildly envious, of course. She was drop dead gorgeous and married to "R.J."

That's fantastic that you write short essays on local places. I know exactly what you mean, you can look at a house, a tree, a stretch of highway, and suddenly it's like a freeze-frame in a movie,and a whole world comes back to you.Interesting to think those memories were tucked away, just waiting to be released and savored.

I love Lola, so I'm glad she's got a bigger part in this book. Mary, I had no idea you had acting chops - is there anything you can't do??? That's so cool you met Robert Wagner! How did you get the part in his film?

Just dropping by to say that I really enjoyed DEAD AIR (laughed a lot reading it) and I'm looking forward to REEL MURDER, too. With the set up you described, I have a feeling I'll be laughing even more. :-) Maggie is a very appealing protag, and I'm happy to hear that Lola's got a big part in the next book.

What fun, Mary! To have seen Natalie on set... a piece of history! (And fun to see her husband, of course! But wow!!!)

When I see a toddler, I'll flash back to when my kids were that age. It makes me miss them desperately and wish I could go back for just one day to relive that time.

Looking forward to your next book, Mary! I love your sense of humor.

Thank you, everyone for the kind comments. Kate, I know exactly what you mean, I see little kids in strollers and flash back to sunny afternoons taking the kids to the pool. I noticed Stevie Nicks said in a recent interview that she was "mourning her children," and I thought, "Whoa, did they die?" But she meant she was mourning their early years, all those magical days she spent with them when they were growing up. Sad, and very true, I thought.

Becke, I am so glad you are a fan of Lola. I was afraid maybe she was a little over the top, but lots of people have written and said they loved her. All her flamboyance, her ego, her larger-than life persona. Thanks!

Robin, it was wonderful, magical. Sadly, that was the last movie Natalie Wood made, she died in that tragic boating accident. I was lucky enough to be part of the filming at a North Carolina golf resort. It was terrific!

Cleo, thank you for stopping by. Every time I think of you writing two wildly successful mystery series, I feel like a slacker. I love both the CoffeeHouse Mysteries and the Haunted Bookshop Mysteries, but I feel particularly attached to the latter, because that's when I first discovered you. I was looking for another great mystery to review for the Examiner, and voila!

Denise, love the Scrumble River series, congrats on book 12, Murder of a Wedding Belle! Wonderful plots, engaging characters. (and you have some TERRIFIC recipes on your website--yowsers. I'm sending boxes of goodies to Iraq and I see some tempting treats to include...bad boys brownies tops the list.)

Kate, Sleeping with Anenome is one of Abby's best adventures yet!! Many more to come. Abby and Marco, what a team.

Hi, Mary ... I live in South Fla., so am always nostalgic about things that don't exist anymore. Just visited Naples, Fla., and bemoaned that a citrus stand that used to be by the city docks is no more.
BTW, can't wait to read Reel Murder .. my fourth mystery, which I'm writing now, also takes place on a movie set (!) in Fla (!). I swear I'm already on page 200-plus of MAMA SEES STARS. Great minds think alike ;-) ?

Better late than never! I made it. I love nostalgia. My kitchen is retro with the black and white squares for the floor and Formica table!

Hi Deborah, we always stay in Ft. Lauderdale but a couple of years ago,we drove over to Naples for the day. Loved it!! Found a nice little place on the water to eat and really had a good time. We had another couple with us and my friend is a world class shopper, so of course she loved all those boutiques on the main street. I read so much about the Florida Film Commission and how they were courting Hollywood film makers, that I decided to write about a murder on a movie set. Yes, great minds think alike!! We should compare notes sometime!! I love Florida and am a huge fan.

Molly, thank you so much for inviting me to join you today! You're the best! You have an amazing background and I always say that if you ever decide to writ a book about your experiences as a media escort, it will be a winner. thanks again.

Hey Lori, thanks for stopping by. Talking about nostalgia, I long for the days of your wonderful Pauline Sokol mysteries! I read every single one--hysterical. I keep looking for an opportunity for you to speak at a conference for medical professionals-they would love Pauline, too. So many people are going into forensic nurse-consulting, such an interesting field.

I am so low tech, I somehow left the previous message as "anonymous"--sorry about that! Mary Kennedy (technically challenged, as always)