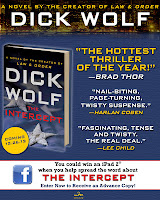 As a long-long-time fan of "Law and Order," I'm delighted to be part of the contest to spread the word about The Intercept, the debut novel from the show's creator Dick Wolf.

William Morrow is offering three copies of the book to readers of Meritorious Mysteries. Of course, they have to know about you, so you'll need to comment on this post! The Intercept will be released on December 26, so we'll need your comments by December 20. If you don't want to publish your email or snail address, send me an email with "The Intercept" in the subject line.

I'm looking forward to reading this one myself!
Posted by Msmstry at Saturday, November 10, 2012