It seems that my life is getting busier and busier as I age—and I don't spend all my time looking for my glasses or going to doctor's appointments! I've just resigned from two extremely time-consuming volunteer positions, but have replaced them with more author escort work and my new position as editor of inSinC, the newsletter of Sisters in Crime. I still read a lot and give mystery talks every month at the Cary Library, but I don't seem to have as much time to write individual reviews.

I still try to read across the board in the mystery genre—light cozies, traditional mysteries, thrillers, private detective, and even a few biographies of crime fiction writers. It's great to have so many options available, and I enjoy picking books to suit my mood.

I enjoyed Richard Hack's Duchess of Death: The Unauthorized Biography of Agatha Christie (Phoenix Books). Were it not for the numerous footnotes that pepper each chapter, the book would almost read like a novel. The book is nominated for an Agatha Award.

David Ellis's The Hidden Man (G.P. Putnam's) forces a young attorney to look back at a crime that happened during his childhood. Could he, even as a youngster, have done something to prevent it? Like all good thrillers, this one held me captive until I'd turned the last page. 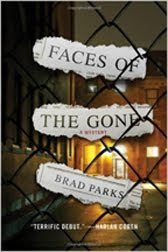 Faces of the Gone (Minotaur) by Brad Parks features Carter Ross, a self-deprecating investigative reporter in Newark, NJ. We meet him just after four bodies, each with a single bullet to the back of the head, are discovered in a weedy lot. The crimes are bloody, but Carter's narration adds a much-needed comic relief, often in his descriptions, "Not many women would have been big enough to envelop Tynesha…. But Miss B was living on the bottom right corner of the panty hose size chart." I love it when I laugh out loud while reading!

Maggy Thorsen is looking for a new site for her coffeehouse, Uncommon Grounds (Severn House), in Sandra Balzo's From the Grounds Up. Just as she finds a perfect place in a historic depot in the oldest section of Brookhills, wouldn't you expect a dead body to show up? Compelling characters in believable situations, snappy dialogue, and a well-crafted plot—what more could you want? Bring your own coffee!

I never get tired of going to Maggody, Arkansas! Fortunately, Joan Hess is sponsoring a tour of that wacky world of Buchannons for the first time in four years! The cast is the same in Merry Wives of Maggody (Minotaur), but the scheme is different: Mrs. Jim Bob Buchannon Buchannon is bringing a charity golf tournament to town. You won't be surprised to learn that nobody in Maggody knows how to play golf, but Mrs. Jim Bob has never been known to let the facts get in her way, and there's no need to start now. Even Mark Twain would love golf in Maggody!

Thanks for the suggestions. hes is an old fave, and the life of Agatha C. sounds fascinating (based on what I've heard from various sources.). Not surprising that her bio reads almost like a novel.

Molly, I loved Brad Park's Face of the Gone for exactly the reason you state. His fresh, sardonic voice balances perfectly with the hard crime he presents.

Oh, you are such a bad influence! My TBR pile is growing... Eager to get the life of Agatha C. Seems like that's a must-read. And a must-know.

It's always nice to know I've helped someone find something new to read and affirming to hear that someone agrees with me! And I've always wanted to be a bad influence.

Molly, you are doing a terrific job with the SinC newsletter! Thanks for continuing to give us great articles, you rock!