On Friday, July 30, Penguin books officially turned 75! They're doing all sorts of things to celebrate, including sending a bright-orange Penguin Mobile (an adorable mini-cooper with the Penguin logo) to bookstores all over the US to bring some of their bestselling authors to parties in their hometowns, increase awareness of The Nature Conservancy, and promote literacy. At each event, a set of 75 Penguin Books is donated to a local library or literacy group. Each author is signing the Penguin-mobile as it makes its way across the United States, and the summer’s events will culminate with a party at the New York Public Library in September where Penguin will auction the car with the proceeds going to the New York Public Library. Penguin is also donating sets of books to numerous U.S. military bases in Iraq and Afghanistan. 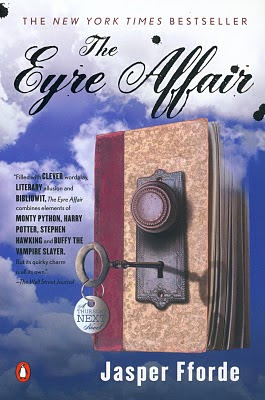 What does this anniversary mean to you? Penguin has sent books to me to give to to two lucky readers of "Meritorious Mysteries." I've got Tana French's Edgar-winning In the Woods and the ever popular Jasper Fforde's The Eyre Affair. All you have to do to get your name in the pot is either send me an email at mysteryheel @ mac.com (with "contest" in the subject line) with your name and mailing address) or post a comment below (if you post anonymously, I won't be able to contact you). The contest will end on Friday, August 6. I'll post the winners' town and state sometime over the weekend.

More about Penguin
Penguin’s founder Allen Lane started the paperback revolution with that little flippant but dignified Penguin (his secretary came up with the name and he sent another colleague off to the zoo to make sketches). One year later, 3 million Penguin paperbacks had been sold. Today, the Penguin imprint alone has over 4000 books in print.

Penguin is hands down the publishing logo most recognized internationally—including the story of Terry Waite, the Anglican clergyman who was held hostage in Beirut. Six months into his captivity, Waite made friends with his jailer, and although they spoke different languages he managed to tell the jailer he wanted a book. He drew an oval, and he drew a penguin, and he said, “find me a book that looks like that, and it will be a good book.” That story says everything about what Penguin stands for around the world.
Posted by Msmstry at Monday, August 02, 2010

I'd like to give Eyre Affair a try -- I've heard about it but never read the series, so count me in for that one!