A MATTER OF JUSTICE by Charles Todd (William Morrow) 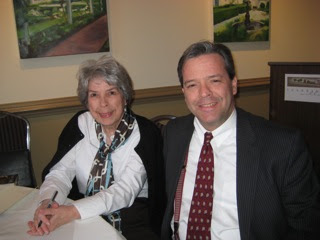 It was a real pleasure to hear Caroline and Charles Todd talk about their latest collaboration last month when they visited McIntyre's Fine Books and Bookends at Fearrington Village.

"Be sure your sin will find you out." Two soldiers in 1900 Africa would have done well to heed Moses' dire prophecy. When payback comes twenty years later, it is up to Inspector Ian Rutledge to make sense of the bizarre murder of a London businessman. Suspects and motives abound in the case, from the usual to the village police inspector. Rutledge must, as always, discover the truth while dealing with his own demons—both from the Scottish sergeant who lingers in his mind after the Great War and his current superior, Chief Superintendent Bowles.

I've been a Charles Todd fan since I read Legacy of the Dead. A Matter of Justice is one of the best in this outstanding series.
Posted by Msmstry at Tuesday, March 24, 2009

I thought this was one of their best books, 'though I love them all and buy them in hardback! Sarah Shaber