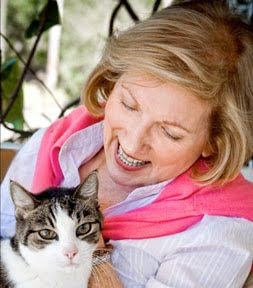 Blaize Clement doesn't feature talking animals or ditzy old ladies who talk to them. Dixie Hemingway is a former law enforcement officer with a tragic history who is now a professional pet sitter in idyllic Siesta Key, Florida.

I'm now writing the sixth book in the Dixie Hemingway Mystery Series, and, as usual, thinking about character names. I believe names are vitally important in a novel. I doubt that John Updike's Rabbit would have grabbed readers' imagination if his name had been Wolff, or that Huckleberry Finn would have become a classic illustration of an American era if Mark Twain had named him Jimmy Jones. For that matter, would Mark Twain have become a popular author if he'd stuck to his real name of Samuel Clemens?

I used to keep a file of good names gleaned from wedding announcements, death notices, or just run-of-the-mill news stories, and from time to time I'd refer to them to see if any of them fit a character l was creating. They never did. In fiction as in real life, a name stands for the person. If the name doesn't fit the person, it creates a kind of awkward dissonance that permeates everything else. In real life, people can change a name that doesn't suit them, but fictional characters are stuck with them, often to their ultimate downfall. Nadine Gordimer once said she couldn't get a story right until she got the right name for her protagonist. I imagine a lot of authors feel that way. I know I do. I've started a lot of novels that never got finished because the main character refused to reveal him/herself to me via a name.

And then there's the need to give each character a name that readers will remember, not to mention the need to think of how the name will sound when it's given a possessive case or is spoken aloud. Give a character a name like Cass, for example, and you have to contend with the possibility of awkward phrases like "Cass's sassiness." Or if you name a character something like Wendy Lou, you run the risk of creating hilarity when you didn't intend it. Give two characters names beginning with the same letters of the alphabet and readers will confuse them and have to go flipping back to see whether Carol is the good twin and Claire the evil one, or vice versa.

Readers frequently ask how I came up with the name Dixie Hemingway for the main character of my mystery series. It wasn't easy. I struggled for a long time before the name came, but as soon as I had it, I knew my character. Just having the name brought her out fully realized, as if she had handed me a written bio. I wish I could say that always happens, or that I have a sure fire way of making it happen again, but I can't. All I know for sure is that it's important to wait until it does happen and not try to force a name on a character that doesn't fit. 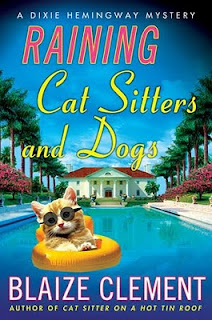 The latest book in the Dixie Hemingway series is Raining Cat Sitters and Dogs. To read an excerpt, check out Blaize's website. By the way, I just got an email from Cary Librarian Karen Kiley which said, "I just finished Raining Cat Sitters and Dogs by Blaize Clement. It was wonderful. Would you like me to do a review for your blog?" Of course, I answered affirmatively. I'll post the review as soon as it's available.
Posted by Msmstry at Monday, February 01, 2010

Thanks, Blaize. I enjoy your series! I'm curious--do you name your books, as well? Or do they come in collaboration with the publisher?

Good post! Dixie Hemingway does suggest several interesting associations! And I couldn't agree more about the importance of names. In fact, I wrote my MA thesis on proper names in one of C.S. Lewis's books.

Blaize Clement is one of my favorite authors and I so rarely see her mentioned anywhere so I'm thrilled to find her blog entry.
I don't feel like I worry to much about names though I did agonize over my main character's last name for quite some time before figuring out what it was.

Blaize Clement is one of my favorite authors and I so rarely see her mentioned anywhere so I'm thrilled to find her blog entry.
I don't feel like I worry to much about names though I did agonize over my main character's last name for quite some time before figuring out what it was.

One of my favorite series is Bill Pronzini's Nameless detective. So, even a nameless name is important.

Dickens is another writer whose use of names was spot on. Looking forward to reading the latest in your series. Thanks Blaize!

Hey. I don't normally leave comments, but I just wanted to say thanks for the great information. I have a blog too, though
I don't write as good as you do, but if you want to check it out here it is. Thanks again and have a great day!

you have a wonderful site!