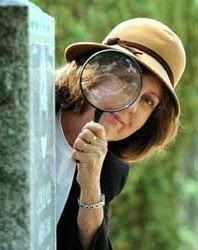 One of the best things about growing older is having long-time friends. I met Penny Warner many years ago at a mystery conference, and I've enjoyed our frequent encounters since. Of course, I've gotten much more from these encounters than she—I've been on the receiving end by reading her great books.

Penny is not only an excellent mystery writer, but she's done books for early childhood and an outstanding YA book entitled The Official Nancy Drew Handbook which included "skills, tips and life lessons from everyone's favorite girl detective. I was delighted to see that Nancy Drew espoused many of the same guidelines that girls' mothers had been giving for years!

Now, Penny has begun a new series featuring San Francisco party planner Presley Parker. I had so much fun reading How to Host a Killer Party that I dropped it in the bathtub and had to get out the hair dryer so I could finish it before bedtime!

I NEED A PLOT!
By Penny Warner
Don’t you just want to slap the next person who blurts out the overused phrase, “Get a life!” I have a life. In fact, with writing mysteries and teaching college classes and babysitting grandchildren, I have more than enough lives. Truth is, what I need right now is a plot. Not a cemetery plot, a story plot. For those who don’t know, a plot is similar to a life, but it’s fiction and has a deadline—although I suppose you could argue that life does too.

I write a bi-weekly column for my local newspaper, based on my life, so I’m glad I have a life. If I don’t experience something interesting, then I have nothing to write about. But when writing mysteries, that’s—to use another overused phrase—“another story.” Making stuff up is much like being a good liar, only you have to lie for about 300 pages. And for that, you need a plot. 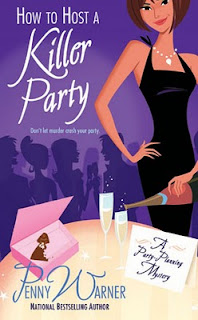 After writing the first book in my new mystery series, How to Host a Killer Party, as soon as I finished it, I found I needed another plot for the next one. So far I’ve poisoned a bride, drowned a socialite, bludgeoned a philanthropist, and creatively murdered several other fictional characters. I’ve got the murder stuff down. What I need now is a cleverly twisting story full of red herrings, misdirection, and cliffhangers.

Therein lies the problem. While I have “a life,” it doesn’t include mayhem, malice or murder. My life is mostly peaceful and pleasant. If I want drama, I turn on the TV and watch shows like “The Mentalist,” “Castle,” and “Criminal Minds.” Sometimes these shows give me ideas for my own plots. But I have to be careful I don’t steal the stories outright. That could lead to courtroom drama of another kind.

At booksignings, I’m often asked, “Where do you get your plots?” My fellow writers usually give a witty response, like “At the plot store” or “Wal-mart.” But the truth is, plots are difficult to come by, especially when your amateur sleuth isn’t a police officer or attorney or private detective. Plots just seem to fall into the laps of those characters.

In How to Host a Killer Party, my protagonist, Presley Parker, is party planner, who lives and works on Treasure Island in the San Francisco Bay Area. In her first mystery, she hosts a party at the infamous tourist attraction, Alcatraz, where the guest of honor is soon found floating in the bay. And that’s the just beginning. So many people have been dropping dead at her parties, she’s going to be out of business soon. That’s called the “Jessica Fletcher Syndrome.” Remember how Jessica Fletcher was always tripping over dead bodies in quaint little Cabot Cove? It’s a wonder there was anyone left in the town.

Besides, who’s going to hire Presley Parker to host a party when inevitably one or more of the guests will be found dead in the punchbowl? In real life, her “Killer Parties” business wouldn’t last the party season. But luckily, writing fiction isn’t like real life. You can make up anything you want. That’s called plotting. And now I’m right back where I started this lament.

Maybe I should take a break from the world of fiction and get back to real life by throwing another party. As long as no one falls face down in the punch bowl. I’d like to keep fiction and real life separate as much as possible.
I’d love to hear how other writers come up with plot ideas. Just don’t tell me you got them at the local “Plot Shop”….

The first book in Penny Warner’s new mystery series, How to Host a Killer Party, is just out from Obsidian/Penguin. Penny Warner has published more than 50 books, both fiction and non-fiction, for adults and children, including more than a dozen party books. Her books have won national awards, garnered excellent reviews, and have been printed in 14 countries. Her first mystery, Dead Body Language, in her Connor Westphal series featuring a deaf reporter in the California Gold Country, won a Macavity Award for Best First Mystery and was nominated for an Agatha Award. Her non-fiction book, The Official Nancy Drew Handbook, was nominated for an Agatha Award. Warner writes for party sites such as OrientalTradingCompany.com, BirthdaysRUs.com, iParty.com, and BalloonTime.com, and with her husband Tom creates interactive murder mystery fundraisers for libraries across the country. She'd love for you to visit her website.
Posted by Msmstry at Tuesday, February 16, 2010

How to Host a Killer Party is a terrific start to a new series. Can't wait to see the next one.

Thanks, Denise.
I'll bet you don't have any plot problems with your wonderful mysteries.

Thanks for letting me share space on your wonderful website, Molly! Can't wait to catch up on reading all the posts!

I really like when people are expressing their opinion and thought. So I like the way you are writing

Looks like I'm going to have to nip along to Amazon, again!

I have no shortage of plots just a shortage of time to write them down - there again if I stopped reading blogs....