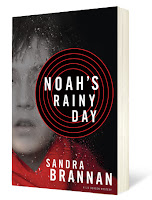 FTC Disclaimer: This book was provided by the publisher.
Posted by Msmstry at Monday, September 02, 2013