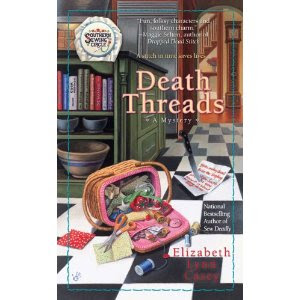 Tori Sinclair is a Yankee librarian who has relocated to Sweet Briar, SC. The local sewing circle ladies of all ages and backgrounds have taken her under their wing to teach her to be Southern. These ladies are people you want to be friends with—most of the time. They do like to gossip but are loyal to each other and the town. This loyalty sometimes causes conflict between the members.

Leona, a non-sewing or cooking member is teaching Tori the “southern way.” Leona has a bet with her twin sister, Margaret Louise (who does sew and is a great cook), that she will learn to sew under Tori's tutelage, but Leona can come up with some very creative excuses.

Meanwhile, another member’s husband, Colby Calhoun, disappears leaving a bloody trail. Previously he has made the town, including the members of the circle, very angry by exposing the truth about the destruction of the town during the “War of Northern Aggression.” Tori is determined to find his body and solve the case. She thinks the town and police are not doing enough because of the anger over his exposé.

There is also a little romance for Tori, Leona, and Ella May Vetter (the town’s eccentric old maid) to make this a true chic-lit mystery.

FTC Disclosure - This book was provided by the publisher.
Posted by Msmstry at Thursday, June 10, 2010

I love southern mysteries, and this one looks terrific.