Wednesday, February 6, 6:00
Grames is senior editor of Soho Press and Oliver is director of marketing and publicity. They'll visit Mcintyres to talk about mysteries and writing. Soho Crime is renowned for both foreign crime novels in translation (like the NY Times bestselling Danish thriller, The Boy in the Suitcase and Japan's 2012 Oe Prize-Winner The Thief) and culturally rich and atmospheric books by English-language authors set in foreign locals (like the March 2012 IndieNext selection Murder at the Lanterne Rouge, set in Paris, and 2010 LA Times Book Prize-Winner, The Ghosts of Belfast, set in Northern Ireland). 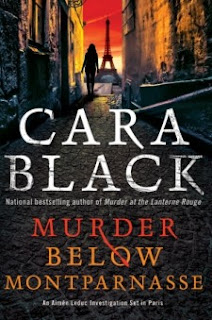 Saturday, March 9, 11:00
A long-lost Modigliani portrait, a grieving brother's blood vendetta, a Soviet secret that's been buried for 80 years—Parisian private investigator Aimée Leduc's current case is her most exciting yet.

When Aimée's long-term partner and best friend Rene leaves their agency for a new job in Silicon Valley, Aimée knows she can handle the extra workload. At least, that's what she tells herself. Repeatedly.

But, all bets are off when Yuri Volodya, a mysterious old Russion hires Aimée to protect a painting. By the time she gets to his Montparnasse atelier, the precious painting has already been stolen (Aimée smells a rat!). The next day, Yuri is found tortured to death in his kitchen. Plus, it looks like Aimée isn't the only one looking for the painting. Very dangerous people are threatening her and her coworkers, and witnesses are dropping like flies. Now, Aimée has to find the painting, stop her attackers, and figure out what her long-missing mother (who is on Interpol's most wanted list) has to do with all this.

Obviously, Aimée has things under control!

Cara Black is the author of thirteen books in the bestselling Aimée Leduc series.

Soho is running a promotion, "Win a Killer Trip Sweepstakes," that in every first edition copy of Murder Below Montparnasse, there is a ticket to a raffle for a trip to Paris touring the city with Cara. She will bring a special entry form to all her events that will allow a second entry to anyone who buys a a copy at the event.