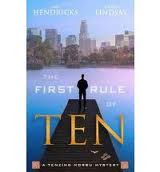 These are the first and second books in the Tensing Norbu Mystery series. Tensing Norbu (Ten) is a former Buddhist Monk and LAPD detective who has decided to become a private investigator after being shot while on the job. Ten is as complicated as the murders he investigates. While growing up in a Tibetan monastery he dreamed of becoming a modern day Sherlock Holmes. Ten lives by the dharma (which is about inner peace and nonviolence) and is a strict vegan; but, he loves his custom made gun, drives a yellow vintage mustang, and does not shy away from physical altercations. Ten’strouble with relationships—mostly female— adds romance to the stories.

In First Rule, Ten becomes involved in an insurance fraud, hippy cult, and a land scam scheme. Ten’s First Rule of Ten is "Don't ignore intuitive tickles lest they reappear as sledgehammers.” He quickly learns that when he breaks this rule all heck ensues! The plot has lots of twists and turns, but the authors bring everything with a great group of characters.

In Second Rule, Ten is struggling to make a living as a PI while waiting to get his license. He gets involved in investigating the unexplained death of a former client, a famous Hollywood producer; worries about two childhood friends in India he cannot contact; and hunts for a Holocaust survivor. When he breaks his second rule, "Be on the lookout for unconscious beliefs. They are blinders that prevent you from understanding what is actually happening,” he gets in trouble with his former LAPD partner and becomes the target of some very rough people.

The only problem I had with the series is the time given to Ten’s meditation and self analysis. I found myself skipping over these parts to get to the action—which really liked . I just did not want to slow down for the inner thoughts! Ten is a very different type of detective and this series is truly one of a kind. I enjoyed both books even if I did skim over the slow parts!

FTC Disclaimer: Both books were provided by the publisher.
Posted by Msmstry at Thursday, January 03, 2013

read the first rule of Ten, am off to find the Second!