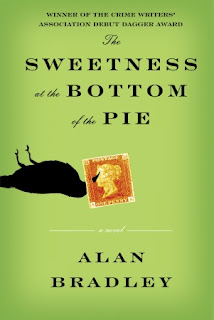 Reluctant readers to grumpy old men and everybody in between will likely enjoy this first novel. Eleven-year-old Flavia deLuce narrates the story of a few summer days in 1950 rural England. Her family could well illustrate dysfunctional: Mother Harriet is missing, presumed dead, in Tibet. Her father, a retired army officer spends most of his day in his study with his stamp collection (and mourning his wife). Flavia's two older sisters Ophelia "Feely" and Daphne spend much of their time tormenting (and being tormented by) Flavia. Flavia spends much of her own time in her well-equipped chemistry lab concocting poisons.

When two mysterious events (Mrs. Muller, the housekeeper, finds a dead bird with a stamp stuck on its beak on the back doorstep. Flavia finds a dying man in the cucumber patch) happen within hours of each other, Flavia turns from her test tubes and Bunson burners to crime solving.

Fans of Harry Potter and Lemony Snickett and mystery readers of all ages, make room in your book shelves. Flavia deLuce is here!
Posted by Msmstry at Thursday, May 21, 2009

I just loved this book. I'm smitten with Flavia and her friends and family (Mrs. Muller especially). Can't wait for the next one!!